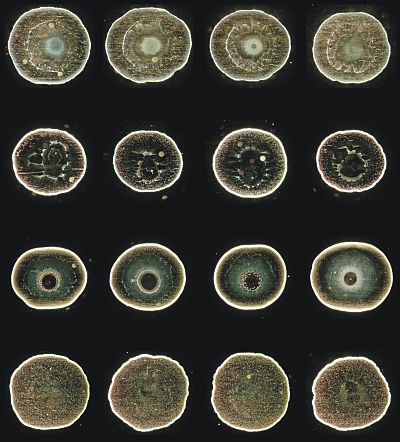 The objective of the test is to find out whether water samples are influenced by the person carrying out the experiment.

In order to ensure the validity of the experiment the test subjects are placed in a room each at least 1.5 meters apart thus avoiding possible interactions. Each test subject individually fills a one way syringe with the control water sample (tap water) and secrets 14 smallest possible drops of water, lined up in two rows divided between two microscope slides. The test subject remains seated until the drops have dried. The microscope slides are then collected and photographed with a dark field microscope and camera. The dark field microscope is set to magnification factor 40. The microscope slides are untreated and have been cleaned with a paper before the experiment. Following the procedure the photos are compared with one another.

The comparison shows, that the pictures of the drops placed by one and the same tester resemble each other greatly in structure and colour while the pictures of varying test subjects differ clearly. Photographs to the left give an excerpt of the test evaluation. It can easily be concluded that the respective structures of the drops on the pictures are substantially influenced by the test subject. The test has been repeated twice. Once as described above, and once with the test subjects using the same syringe, handing it on after they were done. Both experiments gave the same result.

In the illustration to the left each row corresponds to one test subject. The droplets in each row are very similar, and distinct from those in other rows. This is a clear indication that the person handling the samples has an influence on the final result of such experiments.

Find more information about our water research in our books and papers ...
You find this foto also in our shop.!