One often reads about colloidal or "levitated" water. For our water research in our "world in a drop" it is interesting to know:

To answer these questions, we move along the theory of colloids to the preparation of colloidal water in levitation-machines to the darkfield recordings of this water drops under our microscope in the lab.

What is a colloid?

In contrast to true solutions in which the electrolytes are present in the form of their ions (iondisperses system), there also exist colloidal solutions (colloidal systems).

The term "colloid" goes back to the british physicist Thomas Graham, derived from the Greek word for glue ("Kolla"); ("Colloidal", Wikipedia). If the colloidal system exists in form of a colloidal solution, it is called a sol. Within its solution the colloidal particles are more or less freely. By coagulation (flocculation), the sol can be converted into a gel (gelatinous mass). In some systems, this process is reversible (peptization). 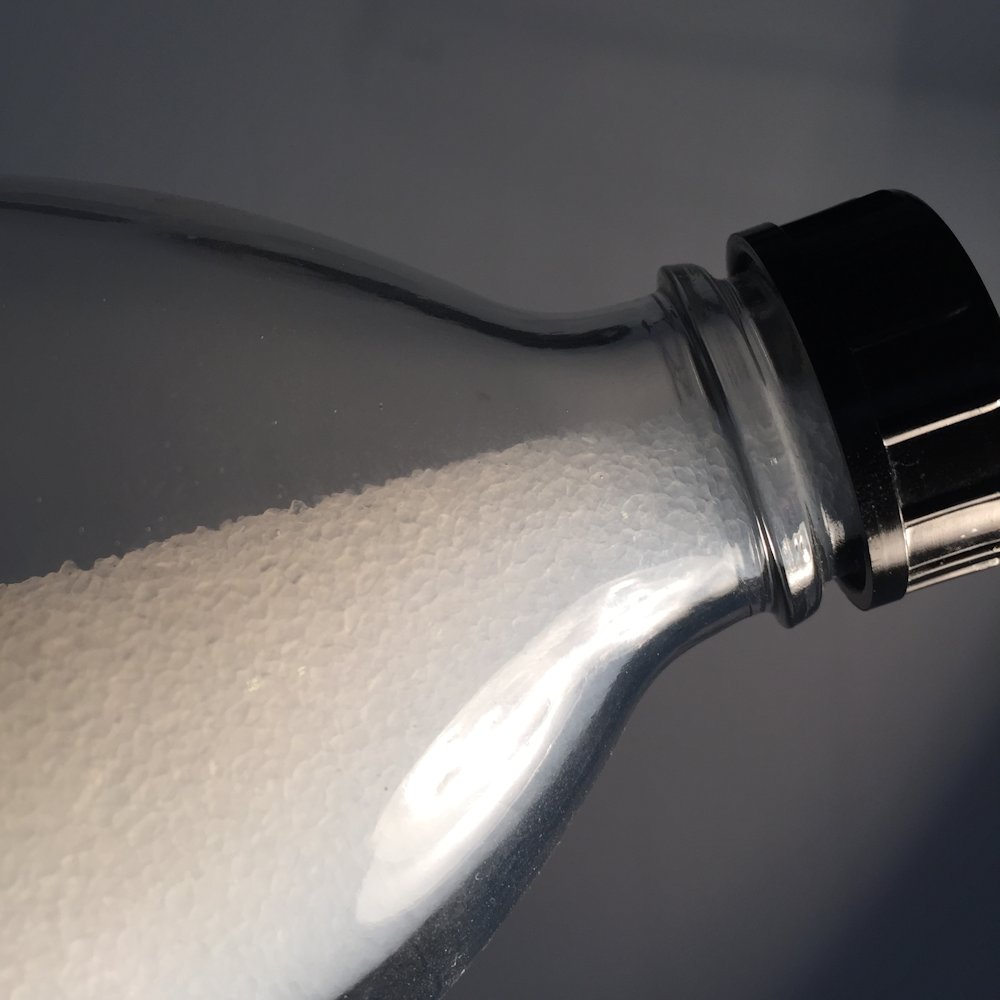 The particle size of the dispersed phase (1 to several 100 nanometer) in the colloidal solution lets the solution appear milky or cloudy (Tyndall phenomenon). But with this particle size, the colloids are by a factor of 1,000 to 10,000 larger than atoms.

However, the colloidal particles (macromolecules or aggregates) are not large enough to be separated by conventional paper filters. Separation is only possible by means of a semipermeable membrane (z. B. parchment paper). This membrane can be passed by normal molecules and ions, but it retains the colloids. In this regard one speaks of dialysis.

At the level of the dispersed particles, different forces are predominant. In this regard for example repulsion and electrostatic interaction have to be mentioned. This leads to the circumstance that the mobility of colloids is substantially less than that of atoms.

There are different forms in which colloidal systems (disperse phase in a dispersionsmedium) occur. Such like emulsions and suspensions of droplets or particles in a liquid, as well as droplets in gas (fog), and particles in gas (smoke). Since the disperse phase is almost in a kind of "limbo", one also speaks of levitation ("levis", lat. "floating"). The German engineer Friedrich Hacheney ("Levitated water in research and application", Michaels-Verlag) introduced the use of synonyms terms "colloidal" and "levitates". 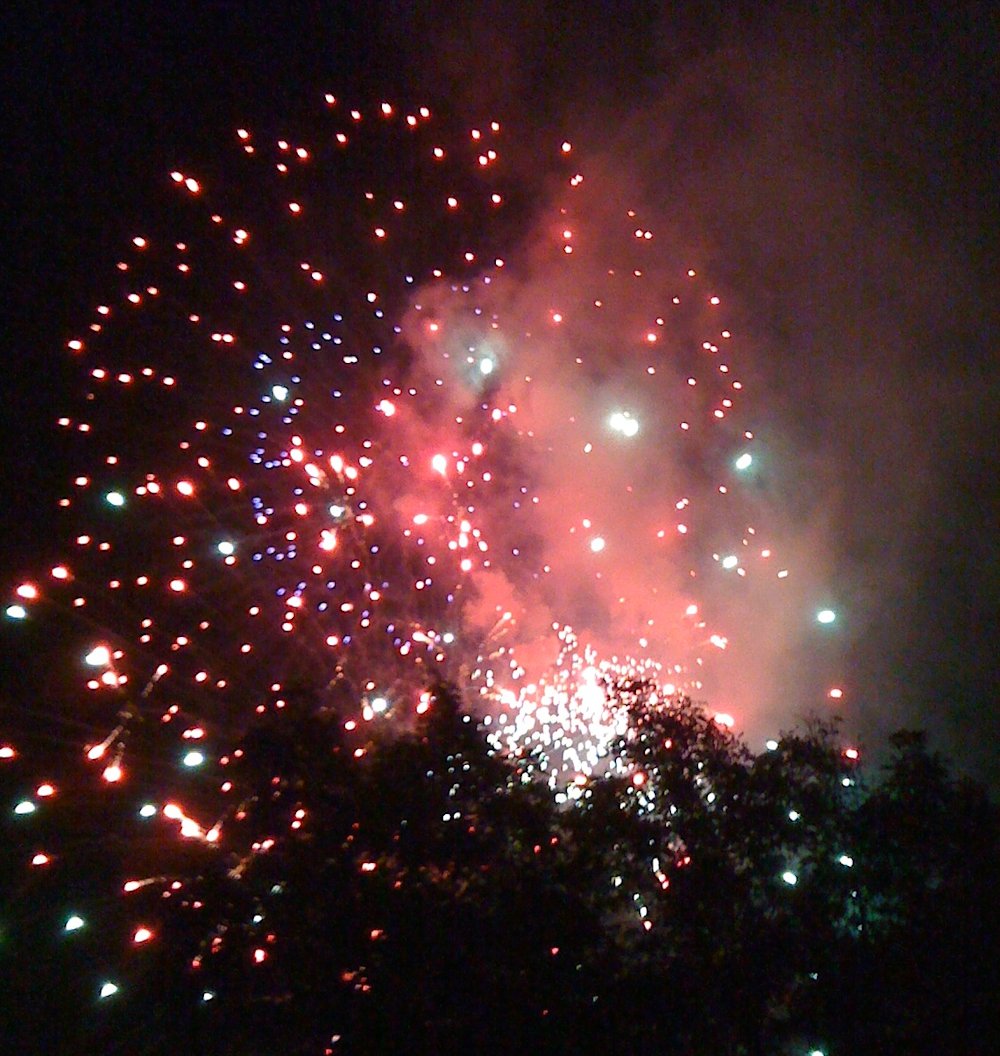 Today in chemistry there is the concept of colloid chemistry. This refers to an area of physical chemistry, which describes the material properties of colloidal systems. Colloid chemistry is due to the German chemist Wolfgang Ostwald (1883-1943); (Handbook of Chemistry, W. Schröter, Dr. habil. K.-H. Lautenschlager and H. Bibrack, supply Harri Deutsch, Thun and Frankfurt/Main, 8th ed., 1980, p. 46).

1. What is colloidal water?

The term "colloidal water" or "levitated water", is probably due to the German engineer Friedrich Hacheney.

The phenomenon of collodiality comes from the observation that particles dissolved in certain substances diffuse unusually slowly, being in a kind of “limbo” within these substances. This is exactly the condition which can be described as levitation ("levis", lat. "floating"). One may think of the phenomenon of "fog", where liquid aerosols in the gaseous water vapor exist in a state of equilibrium and a uniform distribution. 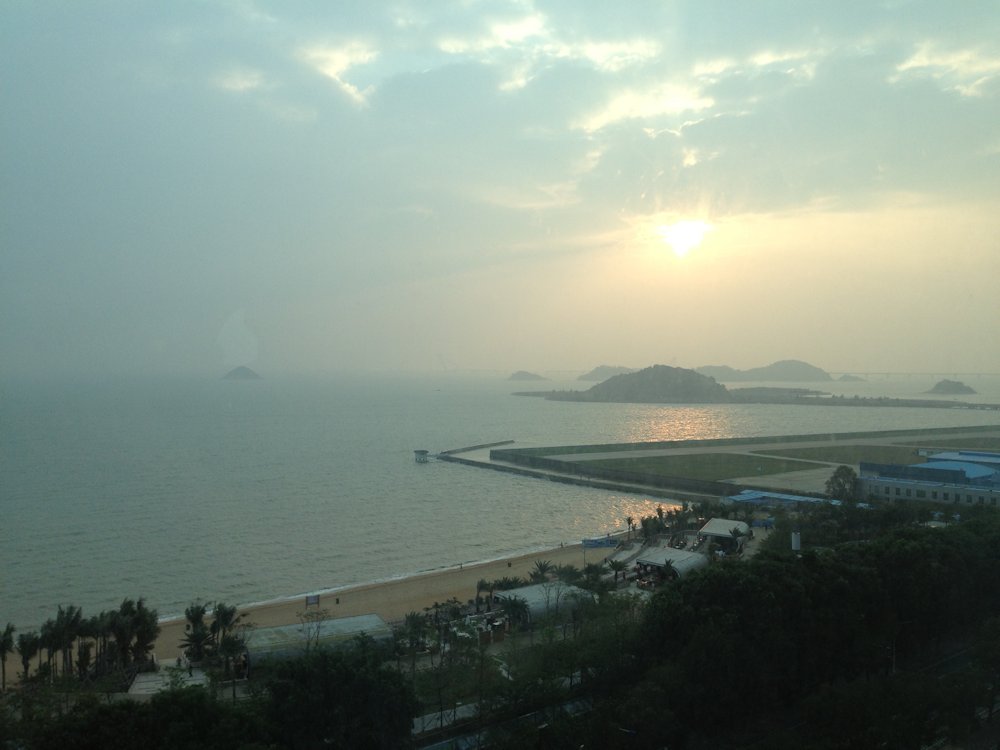 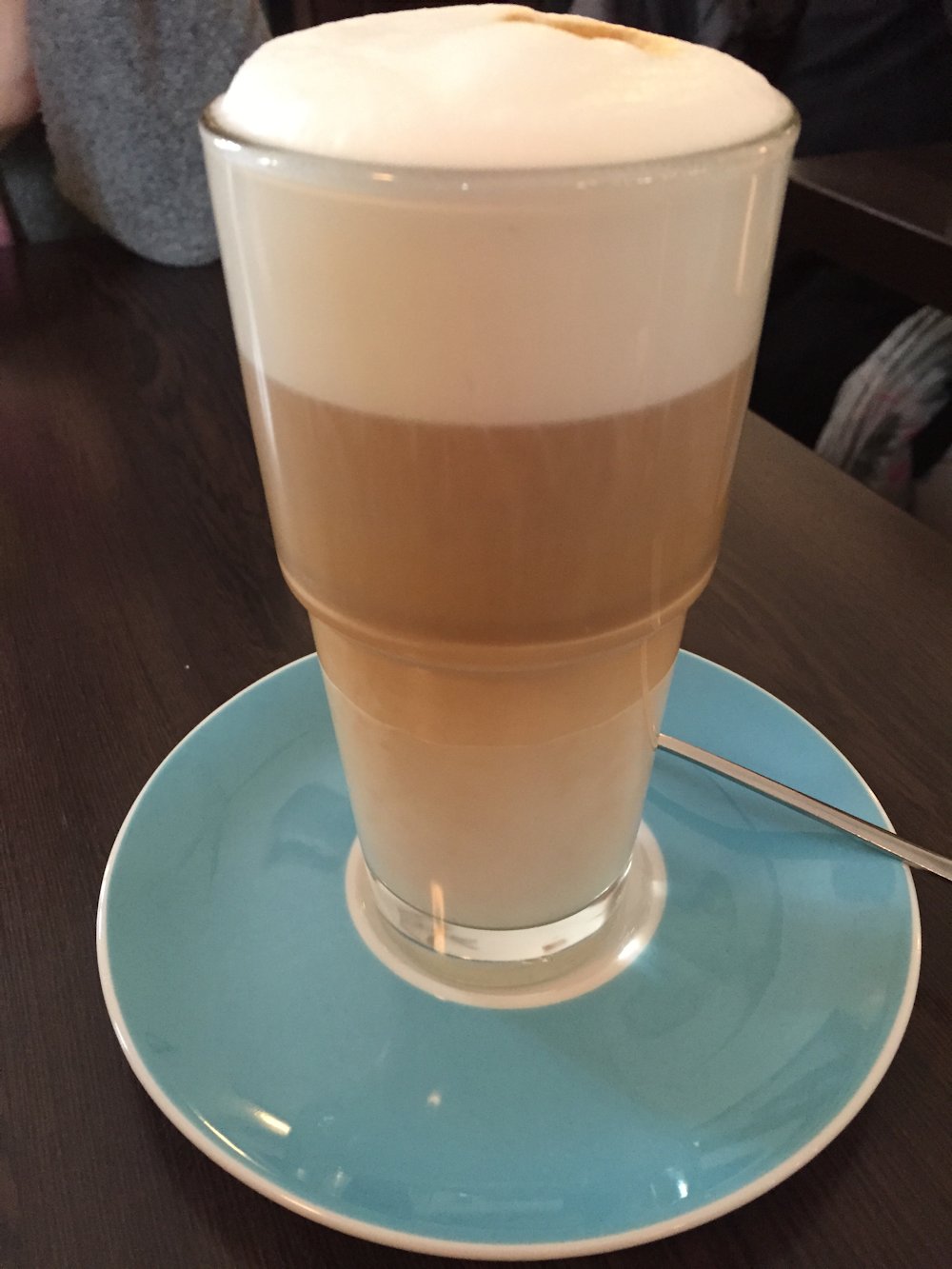 A known form of colloidal water represents silver water. Ultrafine silver particles are dissolved in water with a particle size between 1 and 100 nm. The silver particles can be obtained by mechanically grinding, on the way of electrolysis or by the reduction of silver salts. More about silver water on our website under "silver water". 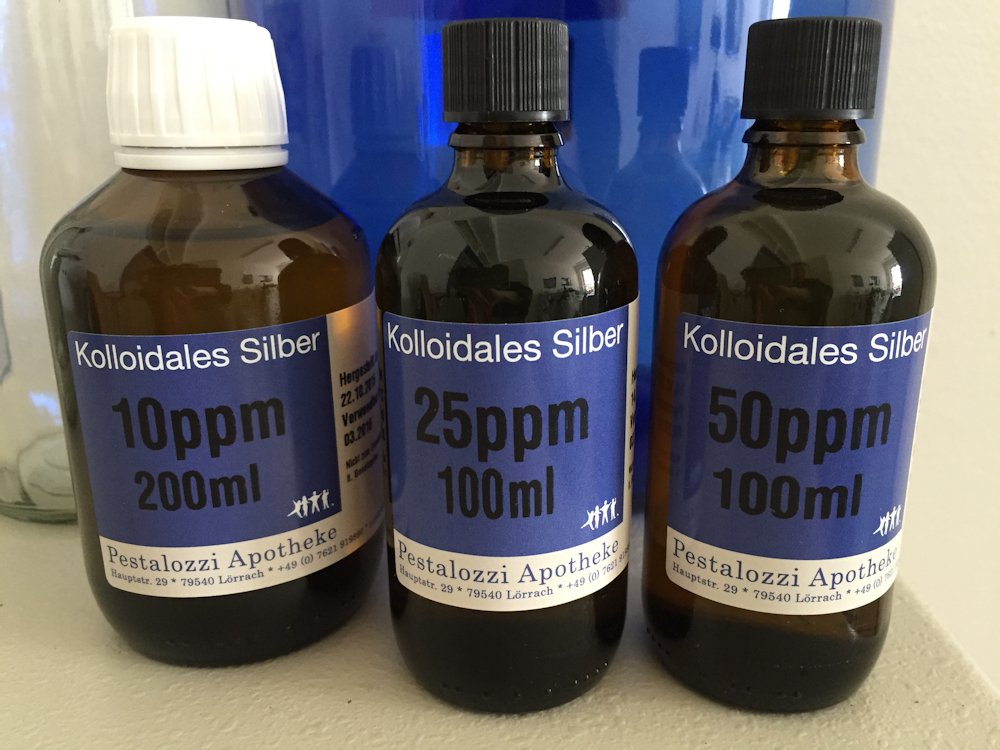 Due to the system properties of colloids - namely uniform particle distribution and resistiveness against diffusion - and the fact that the human body is about 75 percent water, the assumption is of great plausibility, that the metabolic processes of living organisms proceed on the basis of colloidal solutions. Hacheney for example expressed in this context the assumption that one can judge the state of health of a living organism by observing the state of collodiality and its components and that disturbances of the colloidal condition can lead to various metabolic disorders.

2. How is colloidal water made? What is and how does the “levitation-machine” work?

As founder and director of the Detmold Society for organ physical research - Hacheney - invented the "levitation-machine", a machine with a hyperbolic shaped cylinder that pumps conventional drinking water by helically arranged tubes and swirled in a rotating wheel such that water molecules are no longer getting pressed against the force of gravity, but are pulled apart and accommodating larger clusters are crushed. Thereby, the state of levitation is achieved, in which the water molecules arrange themselves with their hydrogen compounds to a reorganized, uniformly distributed and diffusion reduced structure. 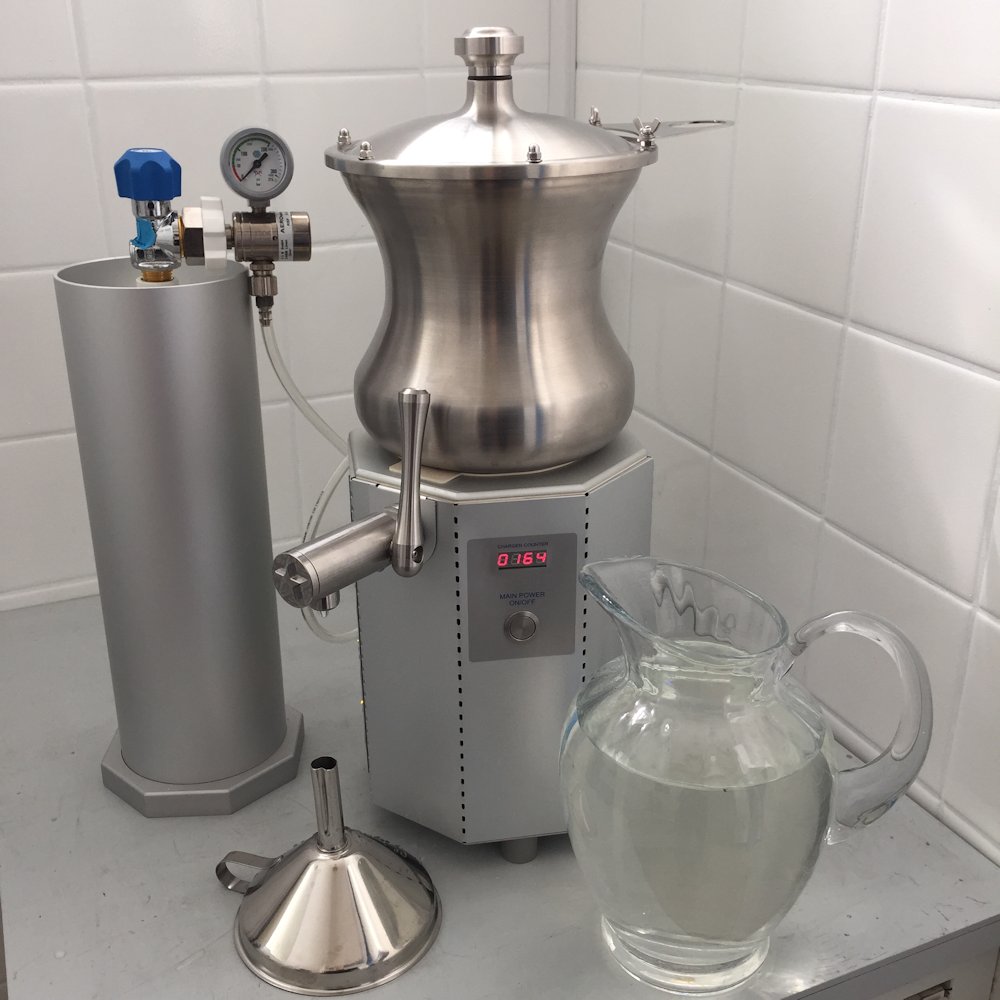 Machine for colloidal water in the tradition of Hacheney

However - and here Hacheney relies inter alia to the English water researcher Bernal (1933): Water molecules are dipolar molecules and are not free and independent of each other in liquid water, but are linked via hydrogen bonds. These larger units form so called "water clusters". Hacheney believes that these clusters can be "reorganized" by the levitation-machine and thus form a separate and special “water structure”.

However, hydrogen bonds exist only for a very short time and break within picoseconds, while at other binding sites just as rapidly new bridges and thus new clusters are getting formed (Physical Research of hydrogen bonds).

3. Colloidal water under the darkfield microscope

For our before-after comparison, we take tap water from our water line and made photographs under the dark field microscope (reference water). From the same water sample, we then produced colloidal water using the “Levitationmachine” after Hacheney". Colloidal water is created while the water is getting processed in the turbine of the “Levitationmachine” for 90 seconds.

Afterwards the water is removed from the machine and dropped onto a glass slide.

The picture of the drops of colloidal water show "cloud-like" structures, the edge of the water drop is not as strong round as before, but more like a flower. 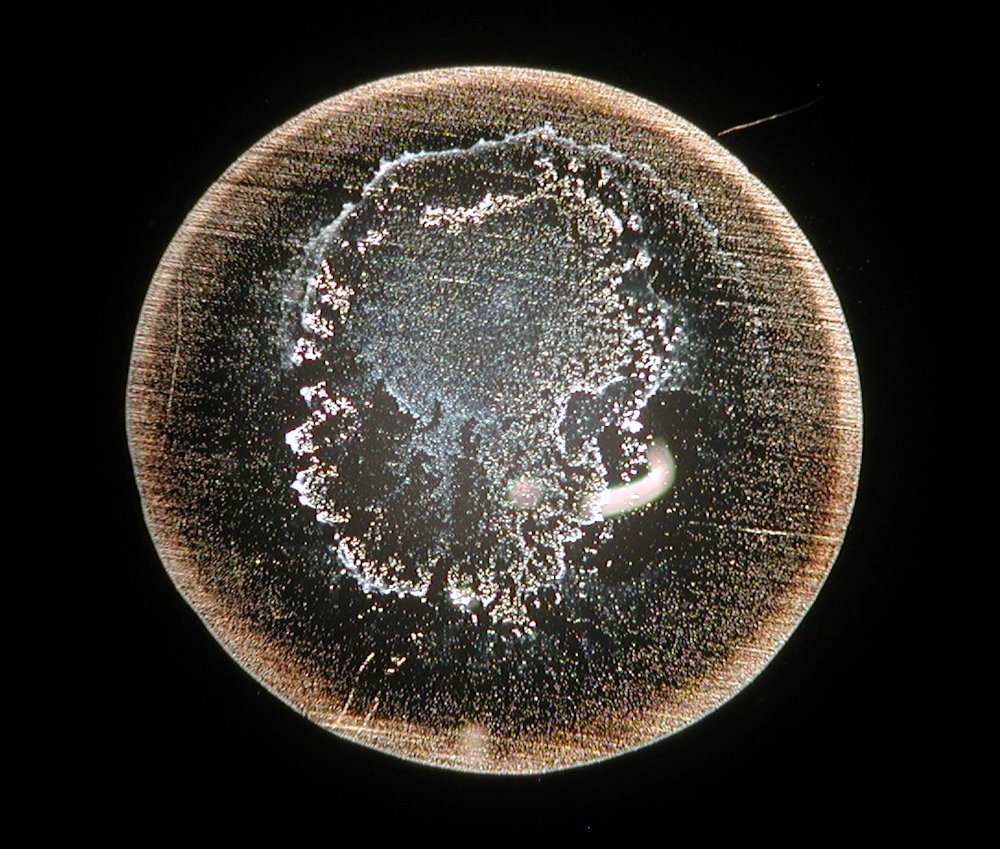 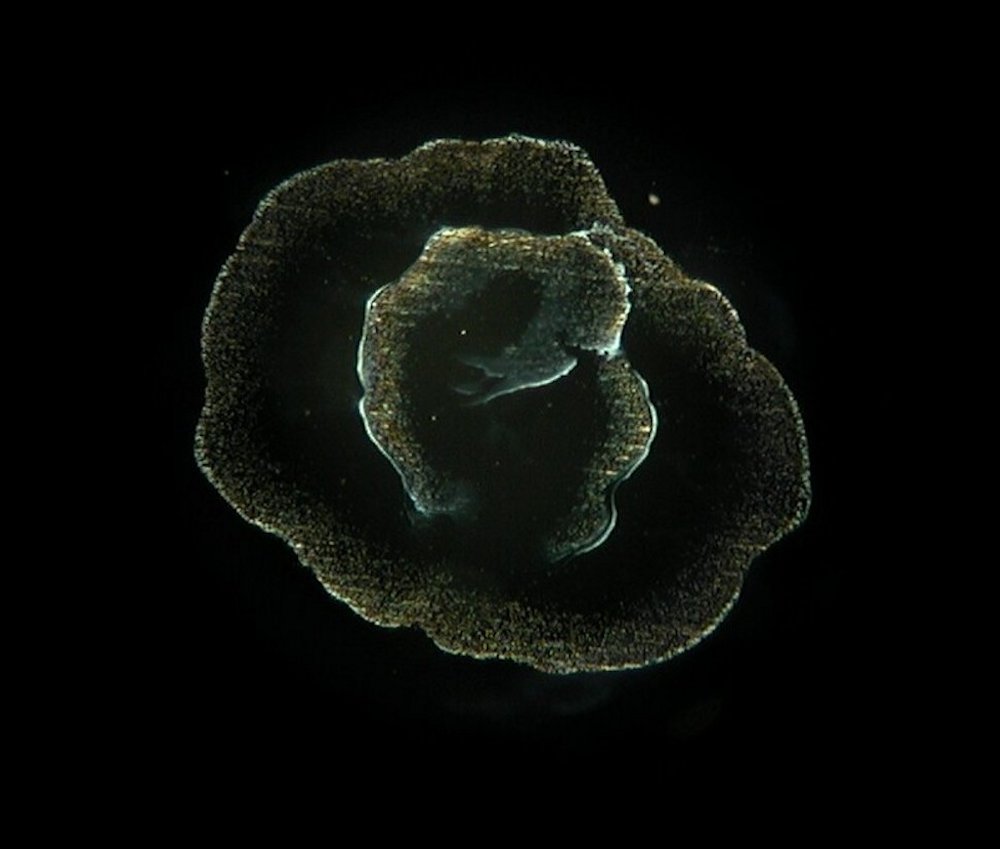 What is the Brownian motion law?

In 1827 the english Robert Brown made an interesting discovery. He observed continued and spontaneous movements of finest particles suspended in liquids under the microscope. The finding that these particles are completely unregulated and change direction and speed persistently, is designated as the Brownian motion. Also in smoke and fog such operations occur. Due to thermal motion pulses are caused which lead to collisions among the suspended particles and forcing them to move. In this way the movement of molecules can be made visible indirectly. The thermal motion is generated by continued, violently and irregularly shifting liquid molecules. The Brownian motion becomes observable in a clear way with reference to aqueous suspensions of titanium white - at 300 - 500X under the microscope; (Römpp Chemie-Lexikon, Franckh'sche Verlagshandlung, W. Keller & Co., Stuttgart, 1972, S. 439).

Find more information about our water research in our books and papers ...